Things are getting frightening.

Veronica put the gun to her head.

I remembered the scene from Terminator 2: Judgment Day, where Joe Morton had to basically shut down after hyperventilating because he knew he was going to die when he clicked that bomb. That he HAD to die. That same gasping, spastic gulping for air, sweating, trembling, crying, Veronica was doing, gun to her sweat-slick temple.

She pulled the trigger. 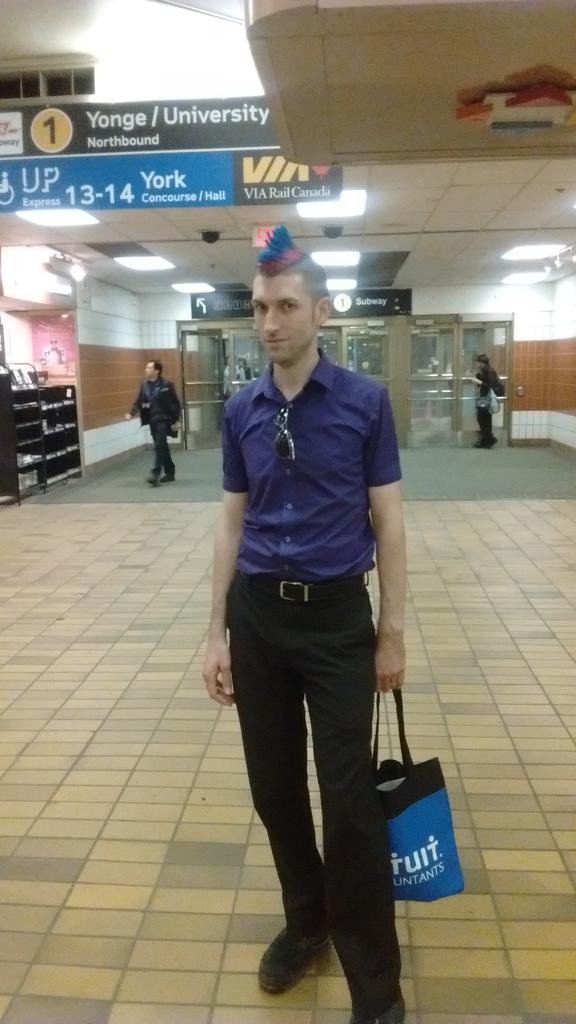 On my way home from the Stouffville reading. Just hugged Sephera Giron buh-bye…

West side of Church and Wellesley, heading North. Stars and something corset on the cockatiel…

This is my annual message for everyone else. This is for all of us who had a different experience with fathers.

This is for everyone who survived verbal abuse, physical abuse, or worse from their fathers. Because your fathers did things so terrible it outweighs anything else they ever did.

This message is for people who only had stepduds in their lives, the guys who wanted your mom but had no interest in her kids and did the minimum or less as a parent.

This is for the people who never had any adult man in their lives step up and act like a role model.

There’s nothing magic about fathers.

Father’ Day is not a universal holiday. When it’s your birthday, it’s not everyone else’s birthday. When it’s Christmas or Easter, you know that some of your other friends observe Hannukah or Passover instead. If you’re American, you understand that your friends in Canada don’t have the day off on Fourth of July.

So this is for everyone who doesn’t celebrate Father’s Day, for everyone who avoids it because it brings up too many painful memories, for anyone who only had the experience of a truly shitty father. For anyone who was forced, as a kid, to experience the petty injustice of signing a card for or wishing “Happy Father’s Day” to someone underserving of it. It’s a bullshit holiday and there are no messages here “to all fathers everywhere” because you and I both know that’s a completely meaningless phrase. Your feelings — your anger, your sadness, your laughter at the absurdity of it, your desire to do better, or to never have kids, or whatever your feelings may be — are legit.

@thetrudz
“I’m finding the national cheering of the erasure of Black women, the LYING about race, the transphobia in defense of a cis WW disgusting.”

‏@thetrudz
“People do not care about Rachel. She is a tool of lies by which to reiterate their seething hatred for actual Black women/transgender ppl.”

Nous transgendons ‏@ThatSabineGirl:-
“@thetrudz This is what I’ve been getting close to but failing to articulate. Thank you.”

Why do people say “grow some balls”? Balls are weak and sensitive! If you really wanna get tough, grow a vagina! Those things take a pounding! – Betty White

We are monkeys with money and guns.