See, I came to the Walking Dead bandwagon late as it is, having only seen it when they had some marathon going on AMC when the sun was out (so summer sometime or something). Due to a serious case of TV ennui. 500 channels and nothing on and all that.

So I saw this bit lingering about on Afrofuturist Affair’s Twitter feed. Started reading it to see what they had to say.

Ended up getting a major shock.

Just one of the points to seriously consider in this post:-

Merle knew where Glenn stood on the pyramid of power simply by the fact that he was allowed to remain at the prison and therefore had no problems challenging him.

As is rightly pointed out, no one asked Rick to live with Shane…

And if, like me, you had no idea about Tyrese’s de-… de-everything-ing in the TV version, you’ll be amazed, like the authors were, that the same people who wrote the comics are writing the TV series. Lemme just quote again to show what happened:-

The sad thing is the contrast between the bowing and scraping Tyrese of the TV series and the powerful, capable co-leader from the comics is glaring.

Thats right. Read it again. You read that correctly. I’ll quote yet again:-

He used to join in the decision making, being consulted by Rick; he was actually one of the few characters who did and would check him.

Succinctly, as they said:-

In the comic series Tyreese is a co-leader with Rick. He’s one of the main fighters of the group, he’s one of the people the rest of the group look up to. He is respected, he is honoured, he is a valued and highly contributing member of the group. In many ways he fulfills the role that Shane fulfills in the television series – only without the arseholery that makes us wish for Shane to become a chew toy every episode. Most importantly, Tyreese could be counted upon to share the burden of leadership with Rick, matching him walker kill for walker kill. Tyreese is so skilled that upon being locked in a gym with walkers, her emerges unscathed with scores of kills to his name.

WHAT?! How could they de-… de-everything him so…

So far we have not seen a lot of Tyrese, which, as we said before, is already a big deviation from the comics where he was an integral member of the group since before the survivors even reached the prison or Hershel’s farm…

This delay means Tyrese didn’t join the group when Rick was still accepting of outsiders, willing to share leadership roles and welcome of help; instead he arrives when Rick is paranoid, suspicious and violently hostile. In a desperate attempt to fit in and be accepted, Tyrese goes beyond accommodating and is positively servile. Whatever they need, whatever they want, he bows, he crawls, he begs – desperate and subservient.

Yeah, that’s right. The two-bit POC player in the TV show that you see here, was a Shane, with all the bad parts out. 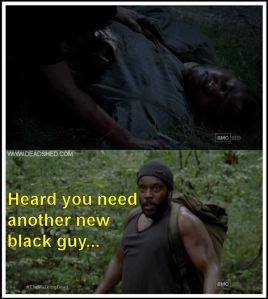 The general deconstruction aside… see what they say about Michonne’s difference as well, not to mention the commentary on T-Dog… that’s enough to make me… reconsider.

They don’t even really hold out the hope that they’re planning on building him to be a leader like Rick. As they said:- “There can be only one silent Black token!”

Me, I’m still getting over the shock that I had something to be disappointed in.

I could see on my own what they’re saying about about Darryl already, that in comparison to his brother’s “classic” depiction, his subtle racism looks as if it doesn’t exist at all. People can say “Well, lookit Merle, I ain’t racist” and all that tripe.