After losing my second diamond Silk Touch pickaxe, regular diamond pickaxe, and diamond sword someone gave me, and at least three regular diamond pickaxes I crafted afterwards, from falling into lava and discovering hitting /back don’t get you your stuff when you get back to your dying spot after I lost obsidian and coal from lava while mining obsidian, I decided not to armour up and go with stone EVERYTHING. But I had to get a diamond pick to mine the copious amounts of redstone, lapis, gold and coal I was finding near this lava flow…

Here’s how it went.

This was me after grinding at a monster pit trap:-

Iron armour regotten after mob pit trap grinding, since the Iron set @greatlight9181 gave me was lost due to the unfortunate Falling Off the End Map incident that shall not  be mentioned (lagged while ender thwapped, fell off, lost first Silk Touch diamond pick, tons of glass, armour, etc…). Someone gave me Iron Leggings gratis afterwards.

But guess what? While mining Obsidian and some Redstone I found lear lava, I fell in. Cue my distress over losing most of the Obsidian, redstone, coal I had found up to that point.

But my deaths weren’t to end there. Whilst carefully crafting my way across the lava, something had to just come up from behind and explode me off into it.

I started using my junk pickaxes, swords and bows from my mob pit trap grinding.

Made it across the lava after leaving a gap in the stone I was crafting  behind me. But they met me at the other side, and, while thwapping, fell in an open square someone left with lava.

But. There was coal. And Iron. And Redstone. And Diamond Ore. 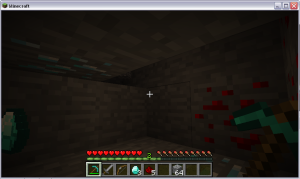 I caved and crafted another after spotting so many ores. This was the first of many.

I caved and remade my first of three? plain Diamond pickaxes. After destroying 2 Redstone ores using a iron pickaxe. Had 10 diamonds after that, and lapis. And Redstone.

After making sure the path behind me was blocked off, I proceeded CAREFULLY towards the ore. The coal I found on the way was already home safely in a chest.

I started spamming the /home home and /back commands to make sure the ores I got were not gonna be lost by some (often occurring?) freak accident. Or a monster surprise.

My perseverance was rewarded. Lookee.

Carefully, carefully, I made my way to it. And started digging around it. That’s when I learned to start digging indiscriminately around me, lava or no. Ores galore. Because. Lookee.

I added stones to make sure NOTHING fell into that lava. And. Lookee again.

On the bottom right of my path, to the right of what I had  already found, I was to find Redstone as well, but I thought I had taken a screenshot. Take my word for it.

See that block near me on the left of the pic? I had looked up and saw coal. So I built up to it. 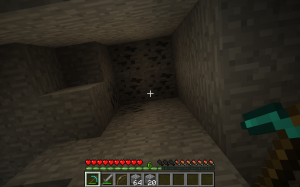 I was being extremely careful, and digging to find blocks to make floor, so I wasn’t porting home as much.  Or at all at this point, I think? Here’s what this section netted me.

Of course I lost the pick after this (fu game, I wasn’t TRYING “to swim in the lava”!) , but everything I mined was home.

If things explode you on land, all you do is lose experience. You can hit /back.

Guess why I’m mentioning it here.

So, that’s my first REAL cavediving experience. And it netted me a ton. Have two stacks and then some of Redstone, Coal(almost three stacks of it), and I was able to remake my Iron Armour set.